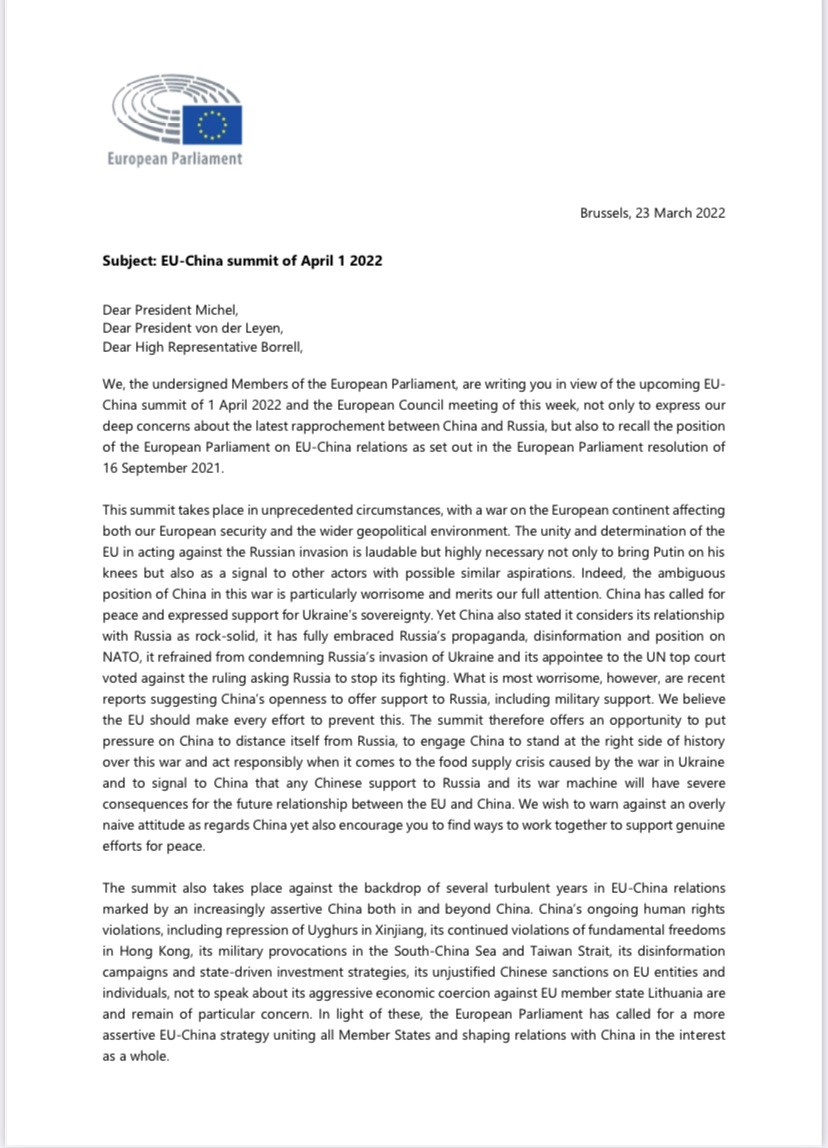 This summit takes place in unprecedented circumstances, with a war on the European continent affecting both our European security and the wider geopolitical environment. The unity and determination of the EU in acting against the Russian invasion is laudable but highly necessary not only to bring Putin on his knees but also as a signal to other actors with possible similar aspirations. Indeed, the ambiguous position of China in this war is particularly worrisome and merits our full attention. China has called for peace and expressed support for Ukraine’s sovereignty. Yet China also stated it considers its relationship with Russia as rock-solid, it has fully embraced Russia’s propaganda, disinformation and position on NATO, it refrained from condemning Russia’s invasion of Ukraine and its appointee to the UN top court voted against the ruling asking Russia to stop its fighting. What is most worrisome, however, are recent reports suggesting China’s openness to offer support to Russia, including military support. We believe the EU should make every effort to prevent this. The summit therefore offers an opportunity to put pressure on China to distance itself from Russia, to engage China to stand at the right side of history over this war and act responsibly when it comes to the food supply crisis caused by the war in Ukraine and to signal to China that any Chinese support to Russia and its war machine will have severe consequences for the future relationship between the EU and China. We wish to warn against an overly naive attitude as regards China yet also encourage you to find ways to work together to support genuine efforts for peace.

The summit also takes place against the backdrop of several turbulent years in EU-China relations marked by an increasingly assertive China both in and beyond China. China’s ongoing human rights violations, including repression of Uyghurs in Xinjiang, its continued violations of fundamental freedoms in Hong Kong, its military provocations in the South-China Sea and Taiwan Strait, its disinformation campaigns and state-driven investment strategies, its unjustified Chinese sanctions on EU entities and individuals, not to speak about its aggressive economic coercion against EU member state Lithuania are and remain of particular concern. In light of these, the European Parliament has called for a more assertive EU-China strategy uniting all Member States and shaping relations with China in the interest as a whole.

While we recognise the strategic importance of the EU-China relationship, we also believe that the EU must acknowledge the risks posed by an increasingly assertive China, and act accordingly. More than ever, it is important that we adopt a strategic response to China’s projection of power and influence and be more firm in the defence of the liberal world order and human rights. We welcome the inclusion of China in the Strategic Compass, but believe that a reference to Taiwan would have reflected a better understanding of the current threats facing the island and would be a strong show of our support to Taiwan.

In recent weeks, we have seen a geopolitical European Union rise up, firm and united in the defence of its fundamental values. We have seen that our unity truly is our strength. Faced with a new geopolitical environment and a rising dragon more assertive than ever, we call on you to hold on to it.